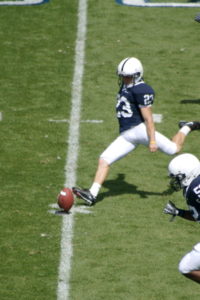 Here’s something that’s made me wonder a bit. At the right is a football (American, of course. 🙂 Taken from Wikipedia and edited a bit) kickoff. We all know what it looks like — ball tilted a bit towards the kicker, so we can kick it in the center of its length.

What confuses me is the difference with rugby. Below I’ve got a picture of the basic equivalent to a kickoff in rugby. Notice that here the ball is actually tilted away from the kicker. I guess this is because the rugby, while similar to a US football, is actually rounder at the ends, so you can actually kick it there, and probably get the ball further, since it’s harder. 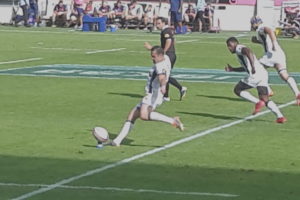 But since I’ve never met anyone who’s played both American football and rugby, I don’t know how to confirm this!

(And for those that actually know rugby and recognize the player: yes, I’ve “inverted” the picture left-right to make it resemble the US Football picture. But this shouldn’t change the discussion…).