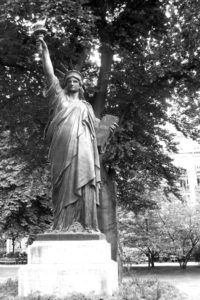 Scale-Model of the Statue of Liberty

A reduced-scale copy of the Statue of Liberty (near the west side of the park, a bit south of where rue Madame runs into the park). Until recently, the statue here was actually given by Auguste Bartholdi. That older statue has been moved to the Musee d’Orsay — this one is a copy.

There is also a small 9/11 memorial plaque here.

Thomas Paine was imprisoned in the Luxembourg Palace.

During the French Revolution, Thomas Paine was elected to the National Convention. He crossed Robespierre and voted against executing the King of France. For this, apparently, he was sent to prison and supposedly escaped beheading only by luck. Paine himself described it so (in To the Citizens of the United States and Particularly To the Leaders of the Federal Faction, from June 5th, 1805):

One hundred and sixty-eight persons were taken out of the Luxembourg [where Paine was imprisoned] in one night, and a hundred and sixty of them guillotined next day, of which I now know I was to have been one; and the manner I escaped that fate is curious, and has all the appearance of accident.

The room in which I was lodged was on the ground floor, and one of a long range of rooms under a gallery, and the door of it opened outward and flat against the wall; so that when it was open the inside of the door appeared outward, and the contrary when it was shut. I had three comrades, fellow prisoners with me, Joseph Vanhuele, of Bruges, since president of the municipality of that town, Michael Rubyns, and Charles Bastini of Louvain.

When persons by scores and by hundreds were to be taken out of the prison for the guillotine it was always done in the night, and those who performed that office had a private mark or signal, by which they knew what rooms to go to, and what number to take. We, as I have stated, were four, and the door of our room was marked, unobserved by us, with that number in chalk; but it happened, if happening is a proper word, that the mark was put on when the door was open, and flat against the wall, and thereby came on the inside when we shut it at night, and the destroying angel passed by it. A few days after this, Robespierre fell, and Mr. Monroe arrived and reclaimed me, and invited me to his house.

During the whole of my imprisonment, prior to the fall of Robespierre, there was no time when I could think my life worth twenty-four hours, and my mind was made up to meet its fate. The Americans in Paris went in a body to the Convention to reclaim me, but without success. There was no party among them with respect to me.

Ultimately, as Paine notes, his freedom was secured by James Monroe when he went to Paris as ambassador. Note that the Luxembourg Gardens are right around the corner from the house on rue l’Odeon. Paine lived for years a stone’s throw from where he almost lost his life.

Lafayette lived in the Luxembourg Palace when he first came to Paris as a boy. His accommodations must be assumed to have been better than those of Paine.