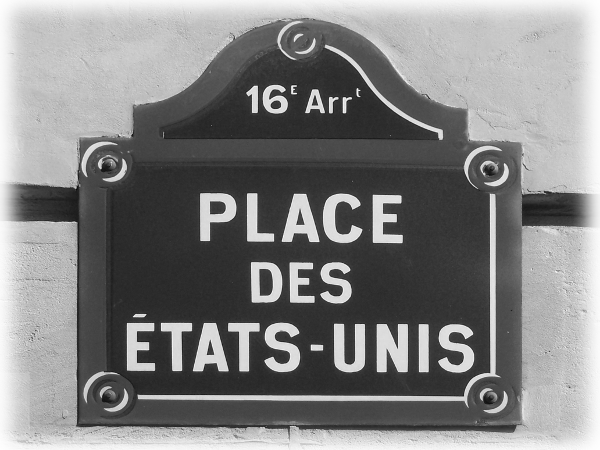 Parts of the place are also called Square Thomas Jefferson, but it’s not actually clear to me where the place ends and the square starts.

My favorite part of this place (other than the kids’ slide, of course), is the statue of Washington and Lafayette at the west-northwest end. It was commissioned by Joseph Pulitzer, of Pulitzer Prize fame, and made by Frédéric Bartholdi, who also did the Statue of Liberty. There is a replica of this statue at Lafayette Square, next to Morningside Park in Manhattan.

A monument to American volunteers for France during WWI is located at the east-southeast end of the place.

Building number 11 here is named (among other things) the Hôtel Bishoffsheim. Woodrow Wilson stayed here during one of his post-World War II visits to take part in the negotiations for the Treaty of Versailles1.

This place got its present name in 1881. Before that, it was called Place de Bitche. Bitche is a community in north-eastern France, not … what you were thinking (I’m allowed to say it if it’s another language, right?). The US embassy was here at that time, at number 3 (the author Edith Wharton seems to have lived at the same address for a while too).

The name was causing some problems, so they asked that the name be changed, and it actually was.2

The east end of the Place abuts Place de l’Amiral de Grasse, which has a memorial to the leaders of the victory at Yorktown.